On Saturday, October 29th, as part of the SRMTA Provincial Convention, one of the main presenters, Jarred Dunn, will be giving a masterclass to advanced piano students, focusing on Chopin’s repertoire. Three students will each have 30 minutes to perform their selection and work with Jarred Dunn on a piece by Chopin. The planning committee would like to gauge the level of interest of teachers and students in the province in participating. To this end, we are asking teachers to submit names of interested students who are working at a Grade 10 level or higher and will have a Chopin piece ready by the fall. Please email Laurien Gibson by July 16th, 2022 to express interest.

In order to give students time to learn a piece over the summer, we are asking that students submit a video of themselves playing the piece they would like to perform in the masterclass by September 16th, 2022. The videos should be sent to Laurien Gibson. The convention committee will then select promising performances and send them on to Jarred Dunn who will then choose the three students who will perform in the masterclass. Students will be informed of their participation by October 1st, 2022. The cost for the participating students is $50.00.

We hope this will be an enriching experience for the participants, as well as for everyone who watches the masterclass. Jarred Dunn’s biography follows on the second page.

Yamaha Artist Jarred Dunn has been described by critics as “evocative and mystical” (New York Classical Music Guide), “technically perfect” (Belarus First Radio), “a piano sound-colour magician” (Muzikos Barai, Vilnius), and “a virtuoso with the most exquisite touch” (Freethought Today, Madison) Featured on the CBC’s Top Thirty Under Thirty: Hot Canadian Classical Musicians of 2018, he has hosted This is My Music, was the subject of the CBC’s Five Things I Learned from Maria João-Pires, and been heard on CBC Radio, Belarus First, Freethought Radio-Television Madison, WWFM: The Classical Network, and WQXR New York.

Mr. Dunn won First Prize and Concerto Award at the Seventh Lithuanian Chopin International Competition (Vilnius 2018) and was a Prizewinner at the First Jan Hoffman International Competition (Kraków 2019). He has appeared with the Vilnius Chamber, Belarus Radio-Television, Toruń, NOSPR Katowice, Budapest Chamber, Sinfonia Toronto, and Niagara Symphony Orchestras, among others. He has performed as a recitalist and chamber musician in North America, Europe, and Australia. Following an all-Chopin recital in Warsaw, one critic described his “virtuosity, amazing sense of style, elegance and noble – but not excessive – sensitivity…beautiful piano and powerful forte, melodious – but not sugary – cantilena, broad phrasing and very rich, nuanced range of sounds” (Nina Sankari).

Noted as “a revered pedagogue” by Tonebase Piano, he is frequently sought after for master classes, lectures, and competition judging. He has presented research papers, lectures and master classes at Canadian, American, and European music universities, most recently Queen’s, Carleton, Ottawa, Toronto, Puget Sound, Katowice, and Bydgoszcz. He has taught numerous master classes, seminars, and lecture-recitals online for music associations and schools around the world, helping teachers and students access music education and enrichment during the pandemic.

After graduating with his BM in Performance at the University of Toronto (WO Forsyth Graduation Award), he took Professional Studies at The Juilliard School with Jacob Lateiner, Yoheved Kaplinsky, and studied with Dorothy Taubman in New York. He graduated with distinction from the piano class of Prof. Anna Górecka at the Karol Szy manowski Academy of Music in Katowice (MM, Diploma). He holds a Artist Diploma from the Bydgoszcz Academy of Music where he was a student of Prof. Katarzyna Popowa-Zydroń. In Europe, he coached with Dmitri Bashkirov, Andrzej Jasiński, Robert Levin, and Maria João-Pires.

Here’s our registration form for 2022 convention! 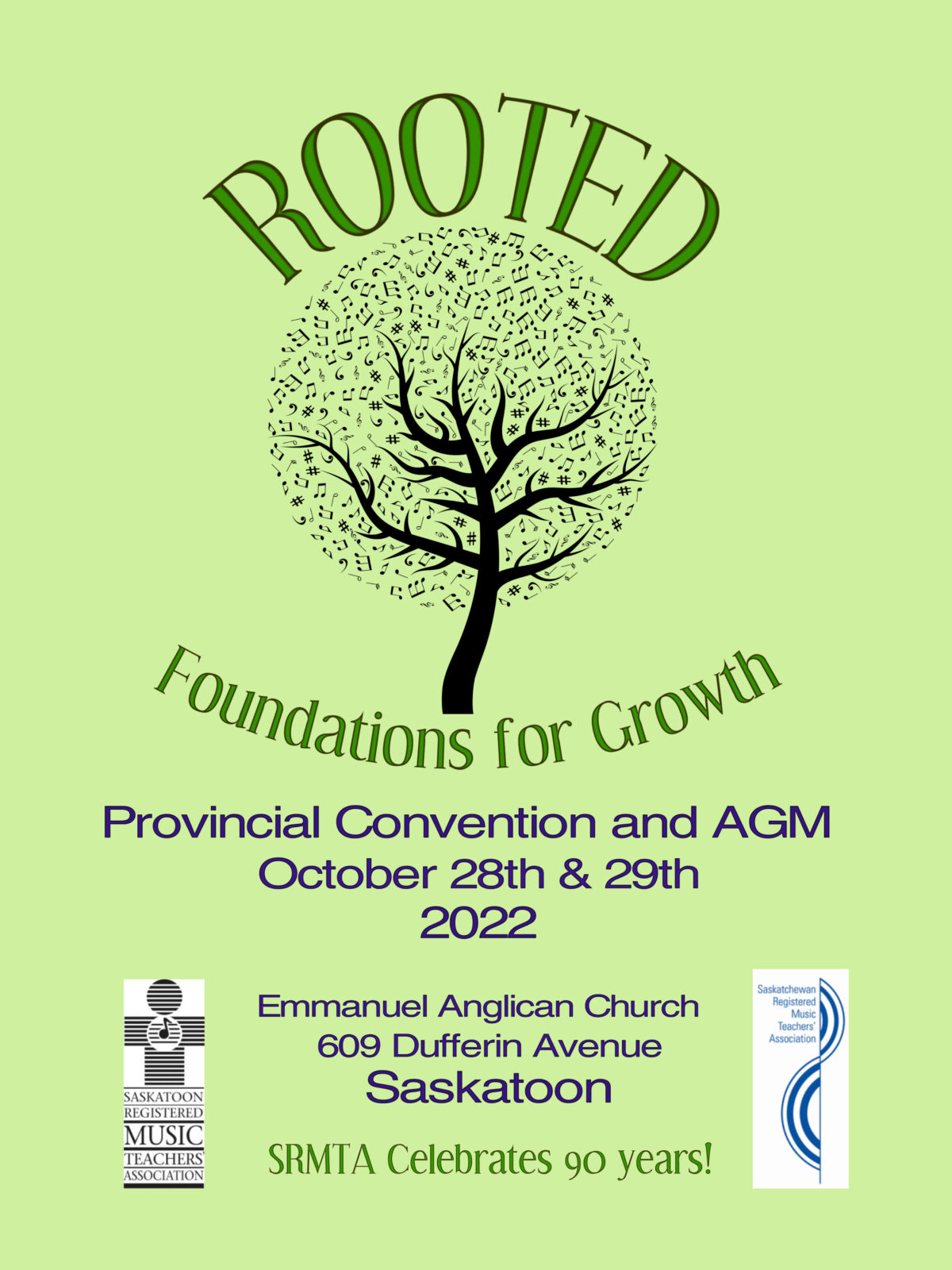 Come join us for convention 2022! We’re looking forward to having you!

An afternoon with Nicole Wilton: Contemporary showcase is Friday November 20th. This event occurs takes place from 1-4 pm on Zoom.

Thanks to the Regina Registered Music Teacher’s Association for hosting a wonderful virtual convetion!

This is our latest members brochure. Looking for a teacher? Click on the document below to get a full listing of our members!

Namoradze was the recent winner of the the 2018 Honens Competition – hailed for his exceptional performances in recital, chamber music, and with orchestra.  His Saskatoon concert will feature the music of Scriabin, Bach, Schumann, and more, including his own compositions.

The Honens Piano Competition takes place every three years and is considered one of the world’s most prestigious events of its kind. Honens prepares its Laureates for the rigours and realities of professional careers in music and creates opportunities for growth and exposure. The annual Honens Festival is one of Canada’s premier piano events.

This event will be taking place on Friday, October the 12th at 7:30 in the Peter MacKinnon Building (U of S Campus). 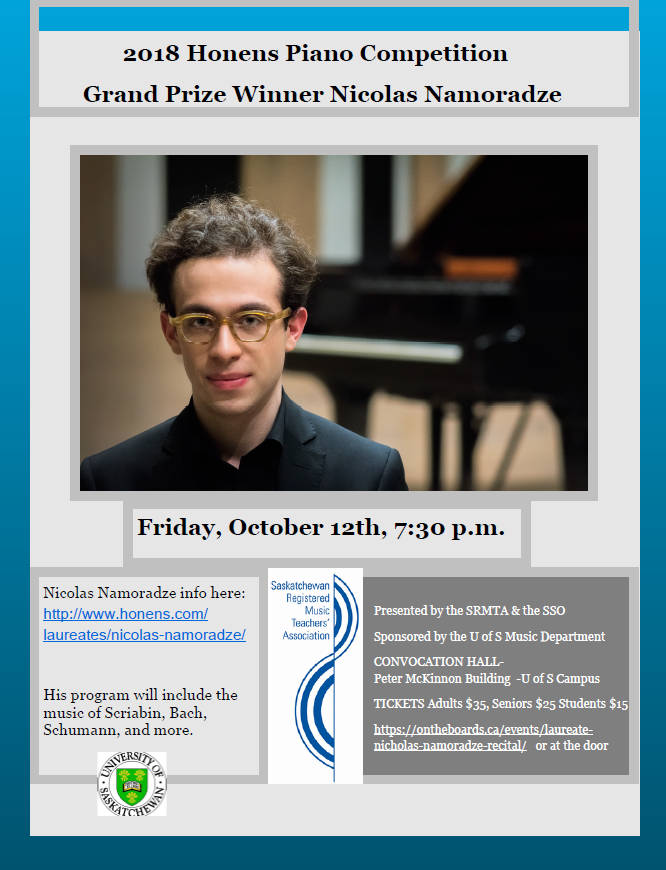 Come check out convention 2018!  Register soon to get the early bird rate – you can download the registration form here.

The Parktown Hotel in Saskatoon

1:45 p.m. Maria Case-The Royal Conservatory of Music- Part 1
The Royal Conservatory has been a leader in education for over 130 years and continues
to evolve in response to the changing world. Join Maria Case for an
exploration of recent initiatives, and an opportunity to have your questions answered.
This guided tour of new resources and tools developed by the RCM to support the
development of the complete musician will include: The Theory Syllabus, 2016 Edition,
and Celebrate Theory series; Engaging Digital Apps that serve as valuable practice tools;
Innovative online courses for students, and how to incorporate them into your teaching.

3:30 p.m. Janice Elliott-Denike: During this centenary year of Debussy’s death, Janice will give a
practical, “hands-on’ presentation about teaching his piano music, looking at specific
pieces as well as an overall repertoire guideline. Bring your Debussy scores and a pencil!

7:30 p.m. Concert Event: Convocation Hall- in the Peter MacKinnon Building (U of S Campus).
The Saskatoon Registered Music Teachers Association and the SSO are proud to present
a recital featuring one of the brand new 2018 Honens Piano Competition Laureates.
The Honens Piano Competition takes place every three years and is considered one of the
world’s most prestigious events of its kind. Honens prepares its Laureates for the rigours
and realities of professional careers in music and creates opportunities for growth and
exposure. The annual Honens Festival is one of Canada’s premier piano events.
President’s Reception to follow at the Park Town Hotel- Presidential Suite

9:00 a.m. Brainstorm Session: “You Tube vs. You Teacher”.
Why would a student choose to learn a piece of music from one of us rather than the
internet? (Facilitator- Michelle Aalders)

9:30 a.m. Dale Wheeler: “Teacher Know Thyself”
How do our teaching practices contribute to our personal growth and ongoing
professional development. Explore how our studio environment, lesson procedure and
analytical and diagnostic skills contribute to our success as teachers, and as a result, the
success of our students.

10:45 a.m. Dale Wheeler: “Do You Hear What I Hear” Teaching Students to Listen.
One of the major tasks facing a teacher is getting students to listen to themselves. The
main difficulty is in teaching WHAT to listen for–the HOW to listen comes later
– strategies for helping students to become better listeners.

1:45 p.m. Karen Gerelus: “It’s Not You, It’s Me”
Teachers often wonder why students quit piano lessons. This study is the first to use
Self-Determination Theory to assess levels of motivation in piano students and also
analyzed seven predictors of student attrition. This session will take the inverse of
the dropout results and offer recommendations on how to retain students.

3:00-4:00 Mary Joy Nelson- “From Bellini to Belt”
This presentation will focus on a specific branch of Contemporary
Commercial voice: the female belt voice. Classical pedagogical approaches will be
compared and contrasted with those used to train the female belt voice,
including similarities in breathing, posture, registration, tone quality/resonance, and
range. The benefits of cross training for both the musical theatre and
the classical voice student will be addressed. For the recital portion of the presentation,
a performance of song selections will allow the listener to compare and contrast aurally
the various sounds and approaches in classical and musical theatre singing described in
the lecture.